Depression is a serious medical illness and an important public health issue. Globally an estimated 300 million people of all ages suffer from depression.1 Depression is one of the most common mental disorders in the United States. In 2017 (most recent statistics available), around 17.3 million adults age 18 or older in the U.S experienced at least one major depressive episode in the last year. This number represented 7.1% of U.S. adults. Depression is characterized by persistent sadness and sometimes irritability (particularly in children).  Depression can cause suffering for depressed individuals and can also have negative effects on their families. It can occur at any time over a person’s life. Click here for a link to Depression in Children and Adolescents. 2 As many as 2 out of 100 young children and 8 out of 100 teens may have serious depression.3 Approximately one out of six adults will have depression at some point in their lifetime. Depression affects about 16 million American adults every year.  Anyone can get depressed. In fact, depression can happen at any age and in any person. Many people who experience depression also have other mental health conditions.4 For example, nearly one-half of those diagnosed with depression are also diagnosed with an anxiety disorder. However, it should be noted they are different disorders with no evidence one disorder causes the other. 5

Depression is more than just feeling down or having a bad day.  When a sad mood lasts for a long time and interferes with normal functioning, you may be depressed.6 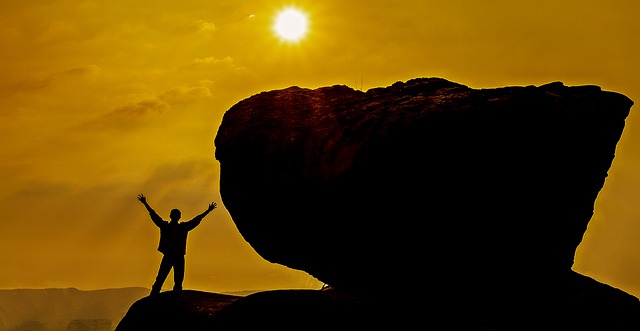 To be diagnosed with depression, the symptoms must last for at least two weeks. Some forms of depression are slightly different, and they may develop under unique circumstances.

Signs and Symptoms of Depression

Just like with any mental health condition, people with depression or who are going through a depressive episode (also known as major or clinical depression) experience symptoms differently. Not everyone who is depressed experiences every symptom. Some experience only a few symptoms, while others experience many.  Listed below are common symptoms:

In addition to the symptoms set forth above, the National Institute of Mental Health also lists the following symptoms for depression: 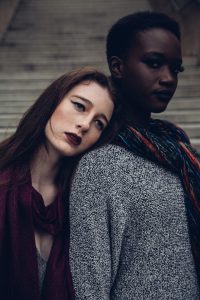 Lean on Others When You Need Support

Depression does not have a single cause. It can be triggered, or it may occur spontaneously without being associated with a life crisis, physical illness, or another risk. Scientists believe many factors contribute to depression. Click on the following link to the National Alliance on Mental Illness (NAMI) website for more detail on each of the possible causes listed below.

According to the World Health Organization (WHO) and based on the latest evidence through October, 2020, more than 700,000 people died by suicide in 2019, which is one in every 100 deaths worldwide. Sadly, this number is typically seen each year. There are twenty times as many attempts.

Worldwide, suicide is the 4th leading cause of death among people aged 15-29. Specific rates vary between countries, regions and sexes.12 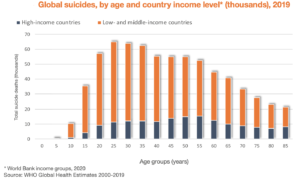 In the United States, suicide rates steadily increased 35% from 1999 to 2018 for both males and females, for all ages between 10-74, and for nearly all race and Hispanic origin groups.

In 2019, for the first time in almost 20 years, there was a decline in suicide rates. The rate declined overall was by 2%.

2020 is the latest year of reporting. Suicide rates have a lag in reporting because it can take longer to get an accurate cause of death stating that it was from suicide.

Although there was an overall decline in suicide rates during 2019 and 2020, it is significant to note that Hispanic men had an increase by 5% and there was lesser increases (but increases, nevertheless) for Non-Hispanic black men and Non-Hispanic American Indian men.13

Risk factors are often confused with warning signs of suicide, and frequently suicide prevention materials mix the two into lists of “what to watch for.” However, factors identified as increasing risk are not factors that cause or predict a suicide attempt. Risk factors are characteristics that make it more likely that an individual will consider, attempt, or die by suicide.

Many people have some of these risk factors but do not attempt suicide. Suicide is not a normal response to stress. Suicidal thoughts or actions are a sign of extreme distress, not a harmless bid for attention, and should not be ignored.19 Even if a person states they are not suicidal when asked, but are exhibiting many of the above warning signs, get help immediately.

Fact: While some demographic factors contribute to a higher risk of suicide, it is important to remember that suicide does not discriminate. Individuals of all genders, races, ethnicities, upbringings, and socio-economic statuses kill themselves. Pay attention to what the person says and does, not what he/she looks like or how you believe that person should think, feel, or act.

Fact: Problems that may not seem like a big deal to one person, particularly adults, may be causing a great deal of distress for the suicidal teen. We have to remember that perceived crises are just as concerning and predictive of suicidal behavior as actual crises.

Myth: Suicide is an act of aggression, anger, or revenge

Fact: Most people who kill themselves do so because they feel they do not belong or are a burden to others. They think that their death will free their loved ones of this burden. Many suicides occur in ways and in places that the person hopes will ease the shock and grief of those they left behind.

Fact: Most teens who attempt or die by suicide have communicated their distress or plans to at least one other person. These communications are not always direct, so it is essential to know some of the key warning signs of suicide.

Myth: Talking to teens about suicide makes them likely to kill themselves

Fact: Talking about suicide with teens gives them an opportunity to express thoughts and feelings about something they may have been keeping secret. Research demonstrates there are no iatrogenic effects of asking teens about suicide (Gould et al., 2005). Discussion brings it into the open and allows an opportunity for intervention. Therefore, youth who come forward to caring adults following a presentation on suicide is most likely the result of providing that youth, who was already suicidal, the freedom to confide their pain to others. Only then will the healing begin.20

September 10th each year is World Suicide Prevention Day.  This day is observed annually to provide worldwide commitment and action to prevent suicide with various activities throughout the world. The International Association of Suicide (IASP) collaborates with the World Health Organization (WHO) and the World Federation for Mental Health to host World Suicide Prevention Day. Take a minute now and read all five categories set forth below and consider completing them by September 10th this year:

Go to Take 5 to Save Lives for further information on how you can complete each of the five categories listed above! Someone’s life may depend on it.